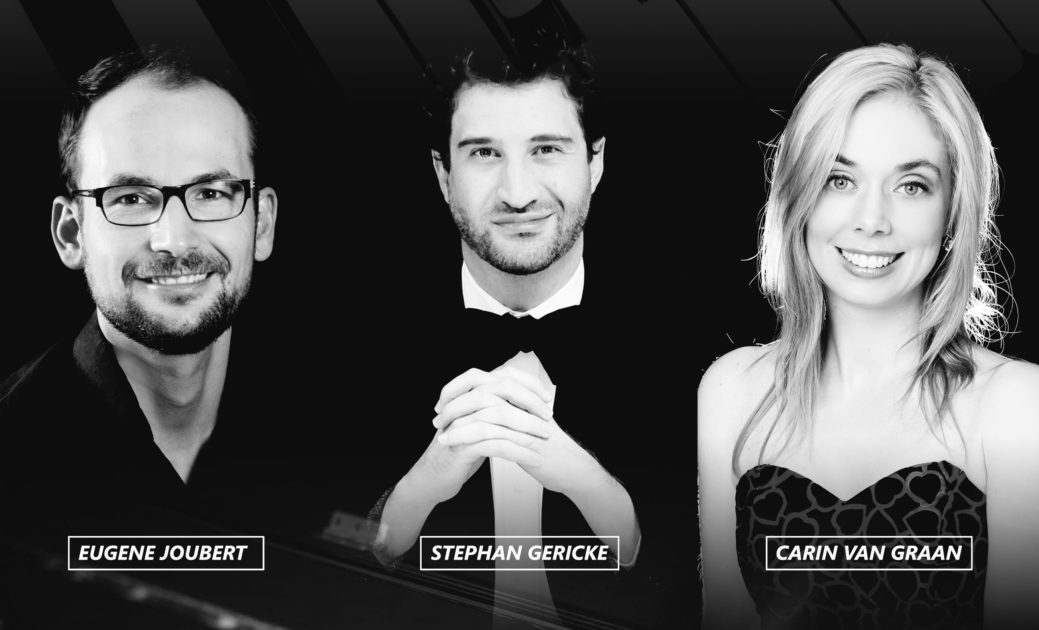 The piano, six hands, a couple of Russians and the Italian walked into a bar…! Pianists, Russians & Rossini is an exciting concert consisting of piano works for four hands and six hands.   The audience can look forward to compositions by Rossini, Glinka, Rachmaninoff, Shostakovich and Tchaikovsky! This is the sixth Aardklop Aubade classical music concert series in collaboration with the Afrikaanse Hoër Seunskool. Pianists, Russians & Rossini takes place on Sunday, 04 July 2021 at 11am in the school hall. Tickets priced at R100 for learners, R150 for pensioners and R180 for adults are on sale at ticketpros.co.za.

Pianists, Russians & Rossini features Carin van Graan, Eugene Joubert and Stephan Gericke – three multi-talented musicians who have played internationally.  The programme maintains an excellent balance between well-known works like Shostakovich’s Waltz no. 2, excerpts from The Nutcracker (Tchaikovsky) and The Barber of Seville (Rossini). The performance also includes accessible works not often performed in South Africa, such as Glinka’s Capriccio on Russian Themes and Rossini’s Tancredi Overture. Join Aardklop Aubade for a pleasant hour of Italian and Russian music.

Eugene Joubert obtained a Master’s Degree from Rice University in Houston. In 2007 he made his debut at the Kennedy Center for the Performing Arts in Washington, D.C. Other international performances include Switzerland, Romania, the Czech Republic, Serbia, the USA, and Denmark. An avid performer of chamber music and lieder, Eugene has performed for various Sempre Opera – and Big Wig Opera productions. He is currently Head of Piano Studies at St Mary’s School in Waverley, Johannesburg.

Stephan Gericke is a conductor, pianist, violinist, composer/arranger and singer. He obtained a Master’s Degree from the University of Cambridge and he often performs as a soloist, chorister, and an ensemble or orchestral musician on local and international stages. Some highlights include his performance of Beethoven’s Piano Concerto no. 1 with COSA, as well as both Prokofieff’s Piano Concerto no. 1 and the piano part of Beethoven’s Triple Concerto with UPSO. As a singer, Stephan has represented South Africa in the World Youth Choir. In recent years he has harnessed his diverse skills predominantly as a conductor.

In support of Aardklop Aubade’s drive to continually develope and grow local talent,  a 10-minute pre-show will showcase the Affies Guitar Quartet featuring Matric pupils Jan Wiese and Armandt Pelser with Jan-Adriaan Lourens (grade 11) and Hein Claassen (grade 10). These young musicians will play Habanera from Carmen Suite by George Bizet and Tango by Thierry Tisserand. The second number in the repertoire, entitled “Rondo in C major” is written by Affies learner Jan Wiese. A remarkable feat for this budding young composer.

The 1920 restaurant is open for pre-concert and post-concert snacks or a light luncheon underneath the beautiful trees on the school grounds!

In line with COVID-19 regulations, seating is limited.  To avoid disappointment, book online now at www.ticketpros.co.za. All COVID-19 health and safety protocols are strictly adhered to. Masks covering nose and mouth must be worn at all times.