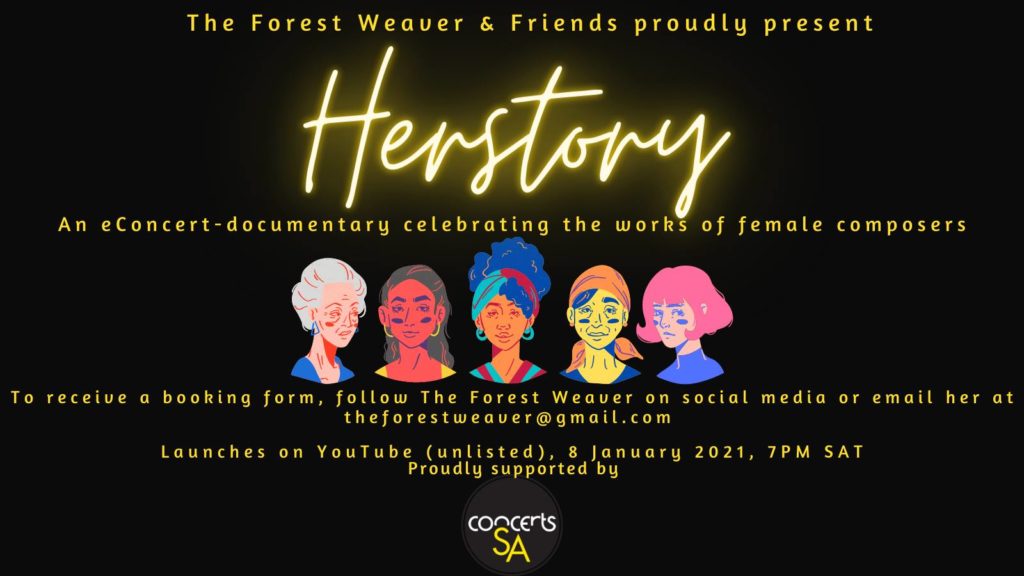 In September 2020, Emma Farquharson (The Forest Weaver) was granted the opportunity to virtually curate a concert-documentary on the lives and works of female composers past and present, local and international. Emma sang in, administratively handled, and directed the inter-provincial collaborations virtually, while also taking care of most of the videography work.

The production is called Herstory, and will launch it on 8 January 2021.

The intention in producing Herstory was to involve and afford multiple South African artists here and abroad a platform to creatively contribute to reframing the concert scene not just as a field of entertainment, but as a radical learning tool that has the ability to shape the future of the classical music industry and gender dynamics in society.

Emma boasts extensive experience in the curation of concerts that champion the work of historically ignored female composers from the Western Art Music canon, with the most recent venture being Hear Her Now; an interdisciplinary concert film of 23mins in length that championed and sought to generate conversation around female composers and their lack of prominence on contemporary music curriculums and concert programmes. It was staged as part of Magdalene Minnaars’ 2020: Entertainment in Containment concert series. One of the pieces showcased was contemporary South African composer, Professor Jeanne Zaidel Rudolph’s Art Song, “Boy On A Swing”, a piece set to the poem of Apartheid-poet Oswald Mbuyiseli Mtshali. This concert also afforded two Zulu-speaking locals to act for the first time in their lives, and the show served as a fundraiser for the Jess Foord Foundation, a Rape Crisis Centre, Counselling and Awareness Campaign. In 2018, Emma staged A Feather on the Breath of God on the Grahamstown National Arts Arena Festival, which featured 10 female composers spanning 700 years of music history. All four shows were sold out and met with rave reviews.

“Given the local and international support that I have received about the work and productions that members of my team and I have done in this field, I wanted to expand upon this concept. I collected more repertoire and expanded my network (particularly high-power South African women musicians and composers), whom I approached to become involved in Herstory, to grow both the repertoire and the cast for this very topical issue. While funding enabled me to give my fellow artists both a creative platform and funding, I believed from the outset that the project has the capacity to grow beyond immediate material benefit. It has, rather, the potential to transcend geographical barriers to learning, and become a potent and diverse showcase of the work of women in music, and a resource on where to source information about their lives, works and scores,” Emma said.